I volunteer with the STEM Ambassador programme in the north of England, and in preparation for a talk / hands-on session I was giving at a local primary school last week, I went in search of visual aids for DNA. The main focus of the event at the school was helping the kids of three Year 3 classes build models of DNA out of sweets (as described in this Guardian article). Before we got stuck into the gummy bears and liquorice, I wanted to give them a short introduction to DNA. I had discovered a lovely pattern for crocheting DNA, which I followed the night before the event, which worked out great (you can see the results in my other blog post about the crocheted DNA itself). After asking them to pass the “DNA” around and take a look, I got started on my talk.

I used the slides below to give them something to look at while we chatted about DNA. Getting them to try to pronounce “Deoxyribonucleic acid” was hilarious for all of us and got them engaged in what I was saying from the start.

After giving them an introduction, I stopped at slide 7 and showed them the sweetie DNA that I had made with my son over the weekend in my best “Here’s one I prepared earlier” style. They were very excited to be using sweets to build their models – I hope they were allowed to eat them at the end of the day! 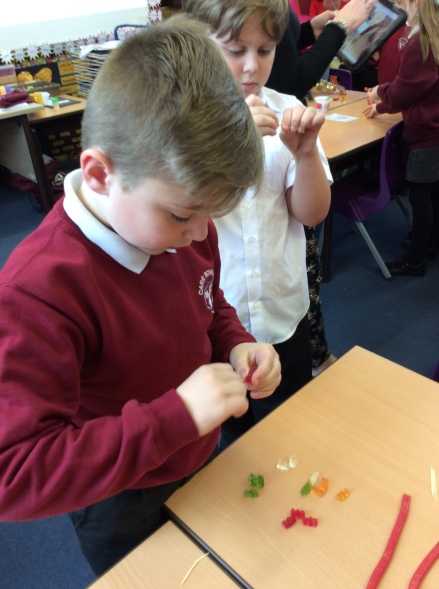 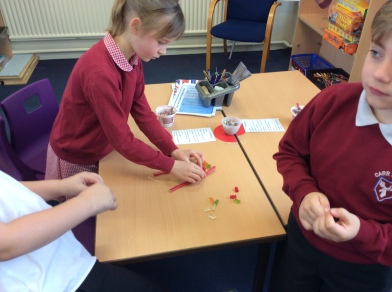 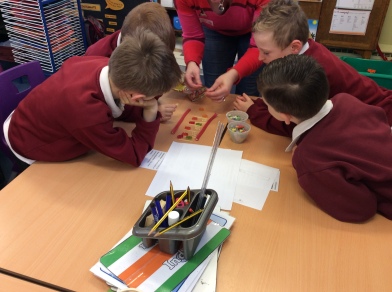 They were already sitting about 5 to a table, so we handed out enough materials that each table could make one model. The sugar phosphate backbone was strawberry liquorice with sherbet inside, and the As, Ts, Cs, and Gs were gummy bears. They all worked together really well. The gummy bears were very colorful but quite firm, so it took quite a bit of effort for the kids to push them onto the cocktail sticks / toothpicks. However, we had only one poked palm (that I was aware of) – the kids were pretty dexterous. The kids made beautiful models, and it was loads of fun helping them. They were quite keen to show us adults their handiwork, too. They were rightly proud of their sweet-based masterpieces. 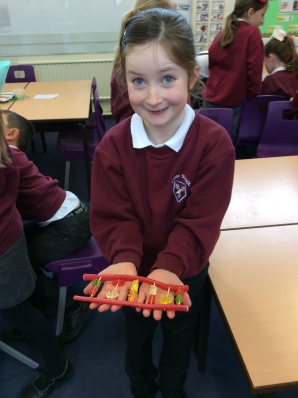 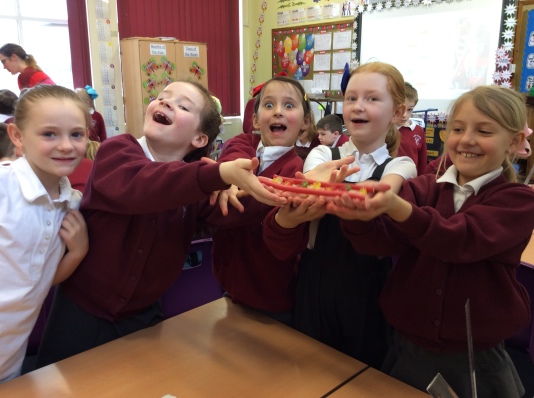 Once they finished building their models, we had just a few minutes left, so I showed them slides 8 and 9, which talked about putting genes from one organism in another. I told them to imagine me tearing out a recipe for fluorescence from the jellyfish recipe book and stuffing it into a bacteria’s recipe book. Then, you could create fluorescent bacteria! Slide 9 is a picture of an agar plate of fluorescent bacterial colonies with a difference: the researchers had made a beach scene with them! So, I asked the kids to draw “bacterial colony”pictures with chalk on black paper. They loved that as well: volcanoes, cheetahs, eagles, sharks, and more. One scientific soul even drew DNA and the bacteriophage from slide 2!

The kids were engaged throughout, providing loads of good answers to my questions and asking fantastic questions themselves. I visited 3 different classrooms, and they all showed such an interest in science. 8 is a fabulous age – all curiosity and interest. Thanks very much to the lovely teachers and staff, and of course to the schoolkids; it was fun hanging out with you all! …and thanks for letting me use your pictures of my visit. Thanks also to the STEM Ambassador programme for both organizing this visit and providing the sweets!

One thought on “Sweetie DNA and Schoolkids: Genes and DNA for Year 3s”

Categories at the mind wobbles